This morning I woke up earlier than usual because Lisbon is an hour behind. I went for a walk along the water and grabbed a pastry at a corner cafe on Cais Sodre, the plaza down below our airbnb apartment. 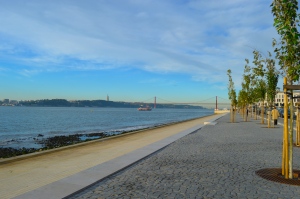 I was not expecting so many hills here–the city is much more like San Francisco than I ever would have imagined. Also, there are the sidewalks: beautiful mosaics of black and white bricks. They really look like tiles, and remind me of the inside of a swimming pool room.

The lot of us journeyed over to Rossio station and together we took a train about 45 minutes out to Sintra, a sunny medieval hill town with not one, but two amazing castles on top of its two twin hills. Of course, the train station is at the bottom, so the lot of us walked up lots of switchbacked narrow paved roads, past cute houses and shop selling all things cork. With the warm weather and the trees and such it reminded Caitlin and I of our trek in the BVIs. Up and up we walked up the mountain, and eventually came to a switchback trail of hundreds of stone steps, winding through tall, beautiful green forest. I felt like I was ascending a Chinese monastery in the woods.

The first castle we came to was the slightly lower one, the Moorish castle. It is everything you would ever think of when the term “castle” comes to mind: large, Great Wall of China-like walls running around with sheer drops down the mountain beyond, and towers and turrets sporting flags that whipped back and forth in the sunny wind. 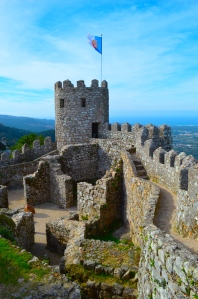 We climbed all around; it was really windy up there. The view of the valley and Sintra below was great, and we could see all the way out to the ocean. 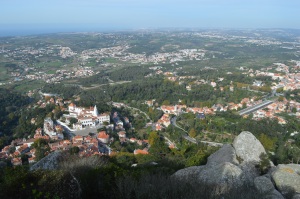 We then hiked up and over through the woods some more to Palacio da Pena, the vivid, bombastic palace situated on the taller of the two mountains. The place was simply incredible: with it’s bright reds, blues, and yellow, and it’s curves and arches and towers, it looks like something you would find in Turkey or Africa.

It had several little towers and even more balconies, all of which provided amazing views of the valley, as well as the Moorish castle below. 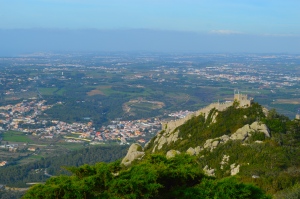 One platform ran all the way around the palace, which Sharkey, Addison and I traversed, careful to stay close to the wall because it was even windier up there. It was probably the coolest palace I’ve ever seen.

We toured around the inside of the castle as well, and then the three of us took the bus down—I give immense credit to bus drivers after seeing them in action here. They are quite skilled.

We then found the amazing and very popular pastry place Addison’s Portuguese grandmother had told him about, and got the Pasteis, which are these delicious little sweet cheese and cinnamon pastries, shaped like little pie cups. Sooooo good. Cinnamon and cheese, who would have thought it?

We did some cork store browsing and then walked back down to the train station, the full moon rising up over the valley and the lights of the castles all lit up at the tops of the mountains. Quite the spot.